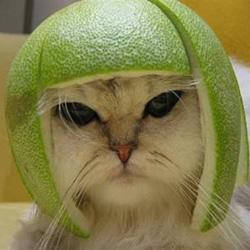 Seems some people can get a little bored during football season. Given enough time, a sharp knife and a fresh lime, this is what could become of the household pet.
Please send your funny pet photos to pets@swanted.com, and I will post them if I deem them none abusive and funny.

Thanks again for your time.

One day a farmer's donkey fell down into a well.
The animal cried piteously for hours as the farmer tried to figure out what to do.

Finally he decided the animal was old and the well needed to be covered up anyway, it just  wasn't worth it to retrieve the donkey.  So  he invited  all his neighbors to come over and help him. They all grabbed a shovel and began to shovel dirt into the well.

At first, the donkey realized what was happening and cried horribly. Then, to everyone's amazement, he quieted down.  A few shovel loads later, the farmer finally looked down the well and was astonished at what he saw.

With every shovel of dirt that hit his back, the donkey was doing something amazing.  He would shake it off and take a step up.

As the farmer's neighbors continued to shovel dirt on top of the animal, he would shake it off and take a step up.

Pretty soon, everyone was amazed as the donkey stepped up over the edge of the well and trotted off!

Remember the five simple rules to be happy:


Free your heart from hatred.
Free your mind from worries.
Live simply.
Give more.
Expect less

A newly discovered chapter in the Book of Genesis has provided the answer to the question, "Where do pets come from?"

Adam said, "Lord, when I was in the garden, you walked with me everyday. Now I do not see you anymore. I am lonesome here and it is difficult for me to remember how much you love me."

And God said, "No problem! I will create a companion for you that will be with you forever and who will be a reflection of my love for you, so that you will know that I love you even when you cannot see me.

Regardless of how selfish or childish or unlovable you may be, this new companion will accept you as you are and will love you as I do, in spite of yourself." And God created a new animal to be a companion for Adam. And it was a good animal.

And God was pleased. And the new animal was pleased to be with Adam & he wagged his tail. And Adam said, "Lord, I have already named all the animals in the Garden and I cannot think of a name for this new animal."

And Dog lived with Adam and was a companion to him and loved him. And Adam was comforted. And God was pleased. And Dog was content and wagged his tail.

After a while, it came to pass that Adam's guardian angel came to the Lord and said, "Lord, Adam has become filled with pride. He struts and preens like a peacock and he believes he is worthy of adoration. Dog has indeed taught him that he is loved, but perhaps too well."

And the Lord said, "No problem! I will create for him a companion who will be with him forever and who will see him as he is. The companion will remind him of his limitations, so he will know that he is not always worthy of adoration."

And God created CAT to be a companion to Adam. And Cat would not obey Adam. And when Adam gazed into Cat's eyes, he was reminded that he was not the Supreme Being. And Adam learned humility.

And God was pleased. And Adam was greatly improved. And Dog was happy.

And the cat didn't care one way or the other. 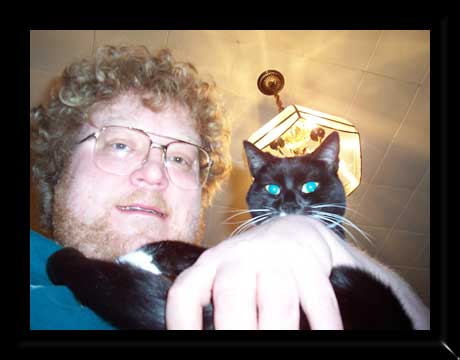